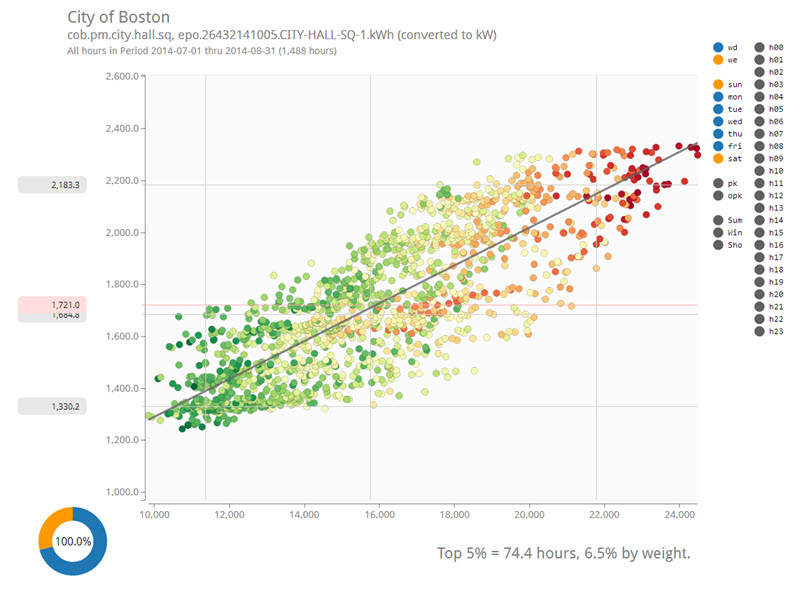 This chart shows Boston's City Hall electric demand (y-axis, in kW) versus the ISO New England regional demand (x-axis, in MW) for the months of July and August 2014.

While the facility doesn't have perfect load correlation with ISO-NE or weather, it does track closely enough to warrant some demand response on those days where the grid will pass 23,000MW.

Pushing the facility load down to its 95th percentile during a 5 hour period on July 2, 2014 would have reduced City Hall's ICAP tag for FY16 by about 10% and would have saved at least $8,000 in demand charges in just July and August 2014 alone.

Sign up for ISO New England SMS and E-Mail alerts to receive timely notifications of when the grid may be hitting a new annual peak. We'll send you a 9:30am "set up" message for the day's expectations, and then an alert if the grid hits a certain threshold during the day. Learn more and sign up at our AEI ISO Alerts page.

With the dog days of summer well underway, it's most likely that the ISO New England electrical grid will hit its annual peak demand hour sometime in the coming weeks. A facility's coincident load at the time of the ISO-NE peak is used to determine its installed capacity "ICAP" tag, and that in turn is used to calculate the capacity charge for the facility's FY18 electric utility bills.  The rates per peak kW have been set and are non-negotiable: $3.43 last year; $6.66 this year, and moving to $15.00 next year and $9.55 in FY19. For facilities on a time-of-use electric utility rate such as the Eversource B3 or National Grid G-3 schedules, demand charges based on peak usage can amount to more than 50% of the monthly electric bill depending on its commodity supplier contract. And even if you are in a multi-year contract that features price protection against these increases, some contracts will discount your rate if you are able to reduce your peak demand.

If your facility's load profile tends to track with the ISO load curve, you probably already have some demand response protocols in effect and already get real-time alerts from ISO.  And you already know the effect on your utility bill or your commodity contract.  If these are foreign concepts, your July 2016 electric bill may show a painful surprise, and your July 2017 bill could easily be far worse.  But it's not too late to:

To put it bluntly, doing nothing is highly unlikely to be the best option for avoiding significant increases in your electric bills over the next several years!

Given these escalating and non-negotiable rate increases or, conversely, the opportunity to get a discount by reducing your ICAP tag, the urgency for this summer is to be on alert for probable ISO-NE peak hours and have a demand response plan in effect for those times. The ICAP tag assigned to a facility during this summer is used in the calculation of demand charges for next year's bills.

Once the "peak hour" urgency passes, there is still a substantial opportunity for savings each month by knowing a facility's occupied weekday profile so that monthly peaks can be can be avoided. For a facility with a 1MW average load, it's not unusual to see peak usage that is 3x or 5x the average. It is very reasonable to see a facility reduce their monthly peak by 5% - say 200kW - and save over $5,000 on a single monthly bill.

Contact AEI for a quick review of your utility bills and to be notified when we see a high probability of ISO-NE hitting its annual peak hour. The grid has already passed within 1% of last year's annual peak when it broke through the 24,000MW level back on July 22th in the 5pm hour thanks to an afternoon of temperatures above 90°F. With peak hours trending toward the later parts of the day, minimizing a facility's ICAP tag doesn't necessarily have to come at the expense of building comfort.

Once you understand the components of your electric bill and the opportunities for lowering those costs associated with demand charges, AEI can help you with the next logical steps. We'll profile the facility's average week, average day, examine its response to weather by season and degree-days. We'll look at night and weekend setback as well as its behavior under varying occupancy levels and can even infer a building's base load as a reference point for other less obvious opportunities. And if you're sub-metering the facility we can guide you on your demand response options when we know the individual circuit loads serving the facility. Reducing your peak demand during the ISO peak demand hour is like a big birthday gift, but reducing peak demand every month is the gift that keeps on giving and can easily exceed the annual value of a reduced ICAP tag.

So Much Data, but Who Can Analyze It?

A survey of utility managers by Oracle reveals some startling gaps between the amount of smart meter data that is collected and the ability to analyze it.