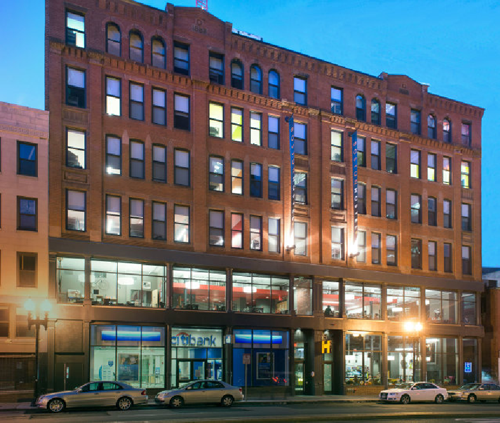 Hostelling International Boston is a 485-bed hostel with over 2,000 heating and cooling complaints in the two years after receiving LEED Silver designation in 2012. The building uses nearly three times the energy of the DOE average for a small hotel in this region of the country.

AEI obtained 5-minute utility interval data and applied its AEI SoftStartTM analytics to profile the hotel’s energy use. Combined with a physical tour of the facility, it was apparent from the data and a review of installed equipment that the building is essentially always in the occupied mode. LEED points were gained at the lowest possible cost. There is no appreciable energy reduction during nights and weekends due to the nature of this very active hotel; any setbacks appear to be limited to 15% or less. Also, given the lack of in-room controls with feedback, the building is essentially uncontrolled for weather with only four major systems on any form of EMS control. 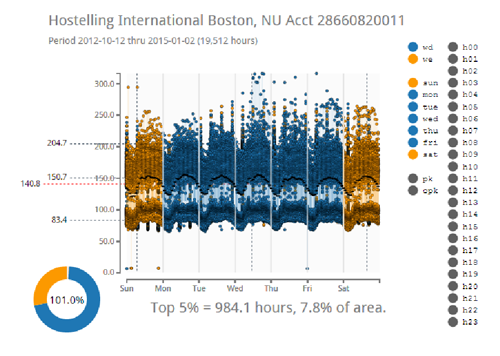 The AEI review of the 2014 gas and electric consumption revealed an Energy Use Intensity (EUI) of 220 kBtu/ft2, compared to the DOE benchmark of 79 kBtu/ft2 for small hotels in this region. A separate comparison of the electric and heating components of the EUI revealed the electric consumption was 22% higher than the benchmark and the heating consumption was almost 7 times higher than expected. At $0.10 per kWh and $1.00/therm, the utility bill is $100,000 higher than expected for a facility of this size, building type and region.

AEI continues to engage with the facility and is working with the EMS vendor to set up trend files that will lead to a detailed set of action items, ultimately allowing the facility to take control of its energy use through energy data analytics. 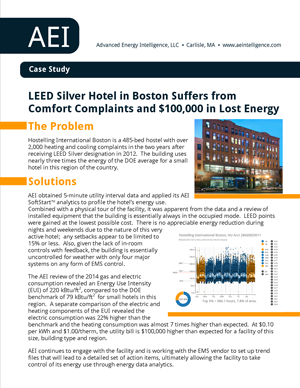